Why Gluten Maybe a Major Culprit in IC

It seems that the gluten-free bandwagon has become another potential trend to join, but if we dig deeper, we can find out the answer to the question: is there any validity to all of the gluten-free noise that we keep hearing about? Like a majority of people, the topic of gluten being associated with health problems has raised a lot of questions, and I wanted answers. Leaving gluten behind is a big deal and it requires serious discipline. After all, it’s found in just about everything and for good reason, it makes our food taste better.  If you have ventured out and tried a gluten-free cupcake you know exactly what I am talking about- it’s nothing to be excited about.

A couple of years ago I decided to do a little research and figure this whole gluten-free thing out for myself. During the process, I ordered a couple of books to read including Wheat Belly and The Autoimmune Solution. Both of these sources, as well as several others, finally convinced me to intentionally forgo any and all gluten. Dr. William Davis and Dr. Amy Myers did an excellent job making their case against gluten and why gluten has been linked to autoimmunity, obesity, inflammation, digestive issues, and more. Our health choices are often associated with common sense and I finally allowed wisdom to be my guide and completely removed gluten from my diet. While this was one of the best decisions of my life, I needed to be convinced and I will share what I learned so that you can be persuaded as well.

Gluten 101 – Not Your Grandma’s Gluten

Gluten is a protein that is in most grains as well as many of the hybrid wheat strains. Today’s hybrid wheat makes up 99% of the wheat in the world. Many try to point out that people have been consuming gluten for thousands of years, but the gluten of today is not the same as that of your grandparent’s era. There have been deliberate alterations in creating gluten hybrids, specifically the gluten protein composite that enhances products in order to make them doughy. Scientists developed new strains of hybrid wheat so that pastries are fluffier and the wheat is hardier; none of these strains are found in the original plants.

Another manmade change made to gluten is in deamination. Science has altered gluten strains so that it dissolves more readily, and this is why gluten is now found in everything from shampoo to nuts. This translates to the fact that we are consuming a completely different kind of gluten and being exposed to gluten in more methods than the past.

If you haven’t read up on gluten, here’s the headline that should catch your attention. Gluten has been linked with over 55 diseases!  The latest modified gluten proteins have been associated with both problems in the gut (leaky gut) and the immune system. This means that gluten can be a root cause for the progression of autoimmune and inflammatory diseases. It took me a while to grasp this as I truly struggled with the idea that it was attributing to my interstitial cystitis. Here is the kicker, even if you haven’t experienced negative symptoms from eating gluten or been diagnosed with an inflammatory or autoimmune disease, consumption and exposure to gluten could open the doors to health conditions in the future. For those that do suffer from autoimmune or inflammatory disease, here are three reasons that gluten should be a concern for you:

Most people aren’t familiar with Zonulin and yet it’s an important protein that is synthesized in liver and intestinal cells that assist in regulating intestinal permeability. Gluten, through food or external exposure, travels through the stomach where it settles in the small intestines and triggers the release of Zonulin, which in turn sends a signal to the intestinal wall to open. Intestinal permeability at this scale is known as “leaky gut.” When the junctions of the gut are loosened they can become weak and allow water to flow back into the gut, putting the individual at hydration risk. Our bodies have natural gut junction tightening cells that allow a balanced regulation. Increased gluten intake introduces higher levels of Zonulin which breaks down the tight junctions.

Elevated levels of Zonulin have been associated with a number of disease states including, but not limited to: celiac disease, juvenile nonalcoholic fatty liver disease, and type 1 diabetes. There is also evidence that Zonulin accumulation is associated with rheumatoid arthritis, inflammatory bowel disease (IBS), asthma, and multiple sclerosis.

Let’s back up for a moment and discuss why leaky gut is a big deal and at the core of autoimmunity including interstitial cystitis. Scientists have been telling us that 60-80% of our immune system is located in our gut, and 90% of the chemicals that regulate our moods, known as neurotransmitters are in the gut as well. This means that a well-functioning gut (digestive system) plays critical roles in good health.

Leaky gut is an imbalance in the digestive system and while there may be symptoms such as bloating, gas, stomach pain, or diarrhea, this can also be the base for a number of chronic health problems. Both leaky gut and gut imbalances, in general, have been linked to such conditions as hormonal imbalances, autoimmune disorders such as Hashimoto’s thyroiditis, and rheumatoid arthritis. Other disorders that have been associated with gut imbalance have included chronic fatigue, diabetes, fibromyalgia, depression, anxiety, eczema, and rosacea.

The lining of your gut acts as a drawbridge gateway to allow the micronutrients in your food to travel back and forth in a balanced manner that does not disrupt the bridge. When Zonulin is released by gluten, it destroys this bridge, letting large proteins such as gluten through when they aren’t meant to. It also enables toxins, proteins, microbes, and even partially digested particles of food to enter the bloodstream. Once in the bloodstream, it is carried throughout the body and an immune response (inflammation) is elicited (bladder inflammation) as your body begins to fight off these foreign invaders. The study of autoimmune disease has included leaky gut as one of the preconditions for developing the disorder. If you have been diagnosed and leaky gut goes untreated, it opens the potential for gut infections, toxicity, and the development of additional autoimmune conditions. Signs that you have leaky gut syndrome include: Irritable Bowel Syndrome (IBS), gastric ulcers, thyroid disorders, chronic fatigue, chronic inflammation (IC), allergies, respiratory infections, arthritis, Small Intestine Bacterial Overgrowth (SIBO), digestive issues (acid reflux, bloating, bouts of constipation and/or diarrhea), hormone imbalance, mood issues, candida overgrowth, nutrient deficiencies, frequent colds or infections, food intolerance or sensitivity, brain fog, Osteoporosis, muscle or joint pain, acne, eczema, psoriasis, and low metabolism.

The immune response triggered by these invaders can be so taxing on the immune system that it eventually becomes stressed and can no longer efficiently handle the chronic onslaught of additional pathogens and invaders. A stressed immune system can eventually go rogue and begin attacking healthy tissue resulting in full-blown autoimmune disease.

The removal of gluten helps to stop elevated levels of Zonulin, which may be one of the root causes of a number of problems. It’s important to note that recent research has shown that consuming gluten can elevate the gluten antibodies for as long as three months. This means that consuming even a small amount of gluten every four months or so could keep your body in a year-round state of inflammation. Remember, there is no such thing as “mostly” gluten-free. You are either gluten-free or you are not. Eating less gluten than before simply isn’t enough to tackle IC head-on- you have to remove it completely from your diet. Your immune system needs to rest and it can only do this if your body is no longer under attack and living in a state of chronic inflammation.

Interstitial Cystitis damage involves a number of variables, but most notably in the mucous layer. This damage changes the permeability of the urothelium, which is a highly specialized lining in the lower urinary tract. Damage here allows an influx of proteins as well as activation of mast cells. Unfortunately, when mast cells begin secreting their content the sensory nerves are affected (enhancing pain response) and these, in turn, activate more mast cells. Certain foods (gluten, dairy, refined sugars, and more), drugs, toxins, and stress contribute to the activation of mast cells in the bladder and other parts of the body. When mast cells become overactive they can cause chronic inflammation or allergic reactions causing damage to the mucous membranes and tissue and the bladder lining begins to leak as it becomes increasingly permeable (sound familiar?). Unfortunately, as one begins to spiral, additional submucosal nerves may be activated, and patients with IC will often experience hyperalgesia, which is an enhanced pain response.

Getting rid of gluten is the first step for anyone on the autoimmune spectrum. Without gluten removal, your body can not begin to heal. Continued consumption of gluten or other inflammatory causing foods means your body will then have to contend with the fallout since this creates a cycle of chronic inflammation. The second thing you need to do is work towards healing your gut. These two steps will be some of the most important changes that you can make in being proactive about addressing your interstitial cystitis and other health conditions.  You can learn exactly how to heal your gut, what to eat, what supplements you will need to restore balance, and how to address IC head-on in my book How I Got My Life Back. If you are ready to make a change, Click Here 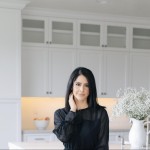 « My Healing Journey with Interstitial Cystits
The Perfect Probiotic »